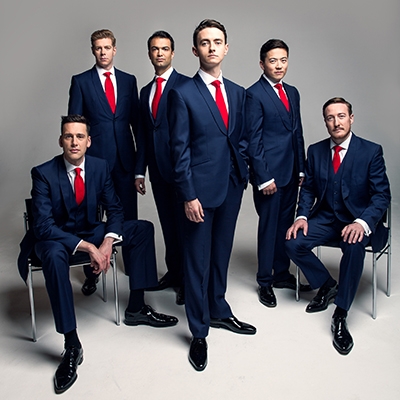 A class act with a delightfully British wit

Acclaimed worldwide for their virtuosity, life-affirming energy and charm, The King’s Singers are in global demand. Their work, synonymous with the very best in vocal ensemble performance, appeals to a vast international audience. Performing to hundreds and thousands of people each season, the group tours regularly to Europe, North and South America, Asia and Australasia. Instantly recognisable for their immaculate intonation, vocal blend, diction and incisive timing, The King’s Singers are consummate entertainers.

The group’s repertoire has evolved to become one of the most diverse and compelling imaginable. The King’s Singers have commissioned over 200 works, including landmark pieces from leading contemporary composers including Luciano Berio, György Ligeti, Sir James MacMillan, Krzysztof Penderecki, Toru Takemitsu, Sir John Tavener, Gabriela Lena Frank and Eric Whitacre. They have also created new arrangements of everything from jazz standards to pop chart hits, explored medieval motets and Renaissance madrigals, and encouraged young composers to write new scores. Their openness to fresh artistic experiences has led to collaborations with artists such as Christina Pluhar, Albrecht Mayer, Emanuel Ax and Sabine Meyer.

Recordings play a significant part in the life of The King’s Singers. Their discography, which comprises over 150 albums and includes more than 2,000 pieces of music, reflects the group’s breath-taking repertoire range. Double Grammy® award-winning artists, the group were honoured in 2009 for their Signum Classics release, Simple Gifts, and again in 2012 for their contribution to Eric Whitacre’s Light and Gold album on Universal/Decca. The King’s Singers have developed distinctively themed recording and concert programmes. Recent releases by Signum Classics include Postcards (2014) – a collection of folksongs from around the world and How Fair thou art (2016) – Biblical Passions by Palestrina. Their Great American Songbook studio album, which includes seventeen new arrangements of these timeless classics, has been performed live across the world.

The King’s Singers have a strikingly rich history of television appearances. Their fruitful relationship as favourites of The Mormon Tabernacle Choir notably led to a broadcast performance at the Winter Olympics in Salt Lake City; they were also featured guests in the choir’s Christmas concert, aired on PBS across the US and subsequently released on DVD. Their performance at the BBC Proms, televised and issued on DVD, received a MIDEM International Classical Award at Cannes.

In addition to performing to capacity audiences and creating highly regarded and much-loved recordings, The King’s Singers share their artistry through numerous workshops and masterclasses around the world. In June 2017, the group will host their inaugural U.S. Summer School at DePauw University, Indiana and in July 2017 will return for their 3rd U.K. Summer School at Royal Holloway (part of the University of London) where they are also Ensemble in Residence. Among the work supported by The King’s Singers Foundation, A Carol for Christmas is a composition competition that seeks to encourage young and up- coming composers, giving the winners the chance for their piece to be performed in King’s College Chapel (Cambridge, UK).

The group’s compositions and arrangements have also reached countless singers in the form of sheet music: at present, two million items have been distributed through the group’s publisher, Hal Leonard, with their arrangements sung the world-over. Recently voted into Gramophone Hall of Fame, rave reviews confirm that The King’s Singers remain one of the world’s finest vocal ensembles.